'Jaws' is the original summer blockbuster, setting the standard by which all others are measured. It's the Michael Jordan of cinema: there will never be another 'Jaws,' simply because the film so profoundly changed the way movies are made and marketed.Based on Peter Benchley's bestselling novel, 'Jaws' centers around the fictional North Atlantic resort island of Amity, which finds itself terrorized by an enormous great white shark. Our hero is Martin Brody, a New York cop who took the job as Chief of the Amity PD to get his family out of the city and then finds himself in the midst of an unprecedented crisis none of his prior experience has prepared him for. The remains of young Christine Watkins are found on the beach, the apparent victim of a shark attack(Chrissie Watkins' death scene at the opening of the movie is one of the most legendary in the history of film). Chief Brody wants to close the beaches, but is refused permission by Mayor Larry Vaughn (Murray Hamilton) and the Amity selectmen, all of whom fear that news of a shark attack off of Amity will threaten the summer tourist trade, on which the town depends for its very survival. The Mayor and his lackies persuade Chief Brody that such incidents are always isolated, and, inexperienced in such matters, he grudgingly agrees to keep quiet.Consequently, the shark kills again (and again), and Chief Brody eventually finds himself dealing both with his own moral guilt for agreeing to hush up the first shark attack and with an enormous human and social catastrophe which appears to be his sole responsibility. Help comes first in the form of Matt Hooper (Richard Dreyfuss, in the role that propelled him to stardom), an icthyologist and oceanographer dispatched to Amity to lend his expertise. Together, Hooper and Brody struggle in vain against both the shark and Mayor Vaughan, who is certain that keeping the beaches open for the sake of the town's economy (and his own real-estate business) is worth the gamble.Finally, Brody and Hooper charter an expedition with the enigmatic, vaguely malevolent Quint (Robert Shaw), Amity's most feared and respected shark hunter, to find and kill the shark and save the town from financial disaster. What ensues is an epic, archetypal man vs. beast quest that would make Herman Melville and Joseph Campbell proud. Our shark, it turns out, is way above average size, terrifically swift and powerful, and uncannily smart, to boot. Hooper, the scientist, is awestruck at having encountered the Bigfoot of the sea; Quint, the crafty fisherman with a serious chip on his shoulder against sharks, realizes he has met the ultimate test of his skills; Brody, who swims poorly and is afraid of water, must overcome abject fear and disorientation just to maintain his composure. Robert Shaw's Quint is one of the greatest anti-heroes the movies have ever seen. He is funny and frightening all at once, and the famous soliloquy in which he recalls the tragic sinking of the USS Indianapolis--where, over the course of a week waiting for rescue, at least 90 US Navy personnel died from shark attack wounds--is one of the most chilling and unforgettable performances ever committed to film. 'Jaws' is the movie that made Steven Spielberg's career, and it's among his finest. It's easy to forget because of his enormously successful blockbusters that Spielberg is a phenomenally skillful and artful director. His timing is superb, he mixes horror with comedy to brilliant effect, he gets great performances out of his actors, and his love for special effects has never overwhelmed his understanding of the importance of story and character. That said, the most brilliant aspect of 'Jaws' was a serendipitous accident.The special effects team had yet to fully troubleshoot 'Bruce,' the mechanical shark, by the time filming was to begin. Under tight budget restraints and enormous studio pressure, Spielberg had no choice but to press on while his crew labored vainly to make the shark work in the cold and corrosive north Atlantic seawater. To compensate for the absence of the non-functional fake shark, Spielberg used shots from the shark's point of view and John Williams' famous two-note theme to create the illusion of the shark's presence in the early scenes. Fortunately the crew was ultimately able to get Bruce into operational status in time to film the big showdown, and some of the scenes are filled in with live-shark footage filmed by Australian underwater video pioneers Ron and Valerie Taylor. Consequently, the audience's fear is magnified by the fact that, for the majority of the film, they cannot see the shark, creating suspense towards the climax of the confrontation between man and beast on Quint's fishing boat.'Jaws' succeeds on almost every level. It is terrifying without being grotesque, and spectacular without being unbelievable (if the shark looks a little fake, remember that, at the time 'Jaws' was released, 'Space Invaders' was on the cutting edge of computer graphics design and there was no such thing as 'Shark Week on the Discovery Channel'). Roy Scheider's Brody is a quintessential everyman, an average guy beset by fear and guilt who finds himself in extraordinary circumstances and rises to the occasion. Dreyfuss' Hooper is brash and brave enough not to come off as nerdy or self-righteous, and his friendship with Brody becomes the backbone of the movie (Spielberg and screenwriter Carl Gottlieb wisely deviated from the novel in regards to the character of Hooper, who was originally Brody's nemesis). Robert Shaw's Quint is a modern-day Captain Ahab, a worthy foe for the malevolent shark. The suspense is potent and the action thrilling, but the humor, emotion, and character development make this movie much more than a summer blockbuster. 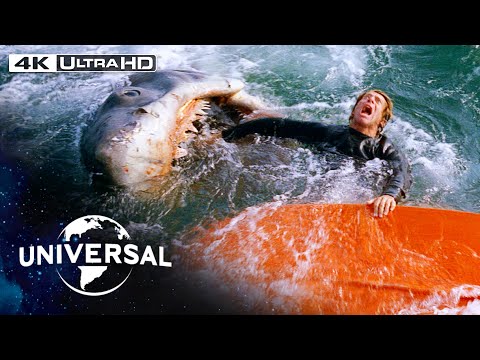 War of the Worlds

The Scorpion King 2: Rise of a Warrior